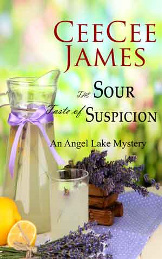 The Sour Taste of Suspicion

When Elise takes a position at spooky old Montgomery Manor as companion to her friend Lavina’s great aunt, she’s expecting an easy job for the holidays. What she doesn’t expect are dead bodies, ghosts and a murderer who’s picked her as the next target.

Delving into the secrets and tragedies of the past, her only clue is a doll’s house from which pieces keep mysteriously disappearing. But what is the connection between the doll’s house and the real one? Is Montgomery Manor really haunted, or is there something even more sinister afoot?