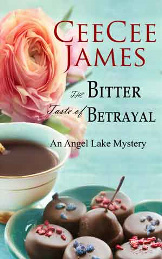 The Bitter Taste of Betrayal

Elise Pepper is about to find out. When she decides to take a long overdue vacation, she discovers that the cruise ship isn’t going to be quite the relaxing trip she’d hoped for.

Everyone want to enjoy a quiet getaway right? Instead, she finds herself in the middle of a theme party. Who knew there were so many Elvises and Marilyn Monroes in the world?

But when an Elvis goes missing and it turns out he was a wealthy philanthropist Elise is dragged into the mystery as the last person to see him. As she tries to convince everybody of what she saw, her frustration turns to fear when she realizes that she’s trapped on board with a killer who will stop at nothing to silence her.